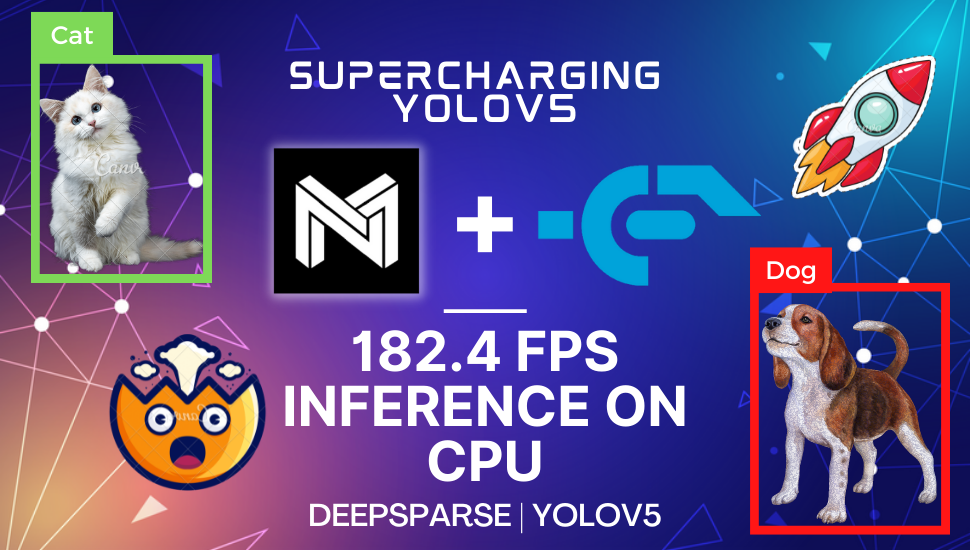 After months of searching, you’ve finally found the one.

The one object detection library that just works. No installation hassle, no package version mismatch, and no CUDA errors.

Elated, you quickly find an interesting dataset from Roboflow and finally trained a state-of-the-art (SOTA) YOLOv5 model to detect firearms from image streams.

You ran through a quick checklist –

You’re on top of the world.

You can finally pitch the results to your clients next Monday. At the back of your mind, you can already see your clients’ impressed look on the astonishing feat.

On the pitching day, just when you thought things are going in the right direction. One of the clients asked,

“Does your model run on our existing CPU?”

That wasn’t something you anticipated. You tried to convince them that GPUs are “the way forward” and it’s “the best way” to run your model in real-time.

You scanned the room and begin to notice the looks on their faces every time you said the word GPU and CPU.

Needless to say it didn’t go well. I hope nobody will have to face this awkward situation in a pitching session, ever. You don’t have to learn it the hard way, like I did.

You may wonder, can we really use consumer grade CPUs to run models in real-time?

I wasn’t a believer, but now I am, after discovering Neural Magic.

In this post, I show you how you can supercharge your YOLOv5 inference performance running on CPUs using free and open-source tools by Neural Magic.

By the end of this post, you will learn how to:

If that sounds exciting let’s dive in 🧙

The recent gun violence news had me thinking deeply about how we can prevent incidents like these again. This is the worst gun violence since 2012, and 21 innocent lives were lost.

I’m deeply saddened, and my heart goes out to all victims of the violence and their loved ones.

I’m not a lawmaker, so there is little I can do there. But, I think I know something in computer vision that might help. That’s when I came across the Pistols Dataset from Roboflow.

This dataset contains 2986 images and 3448 labels across a single annotation class: pistols. Images are wide-ranging: pistols in hand, cartoons, and staged studio-quality images of guns. The dataset was originally released by the University of Grenada.

Let’s also put the sparsification recipes from SparseML into the recipes/ folder. More on recipes later.

Here’s a high-level overview of my directory.

NOTE: You can explore further into the folder structure on my Github repo.

IMPORTANT: The sparsification recipes will only work with Neural Magic’s YOLOv5 fork and will NOT WORK with the original YOLOv5 by Ultralytics.

For this post, we are going to use a forked version of the YOLOv5 library that will allow us to do custom optimizations in the upcoming section.

To install, all packages in this blog post, run the following commands

Or, if you’re just getting started, I’d recommend 👇

🔥 Run everything in Colab with a notebook I made here.

Now that everything’s in place, let’s start by training a baseline model with no optimization.

For that, run the train.py script in the yolov5-train/ folder.

All metrics are logged to Weights & Biases (Wandb) here.

Once training’s done, let’s run inference on a video with the annotate.py script.

The first argument points to the .pt saved checkpoint.

NOTE: The inference output will be saved in the annotation_results/ folder.

Here’s how it looks like running the baseline YOLOv5-S on an Intel i9-11900 using all 8 CPU cores.

Actually, the FPS looks quite decent already and might suit some applications even without further optimization.

But why settle when you can get something better? After all, that’s why you’re here, right? 😉

DeepSparse is an inference engine by Neural Magic that runs optimally on CPUs. It’s incredibly easy to use. Just give it an ONNX model and you’re ready to roll.

--weight – Path to the .pt checkpoint.

--include – Which format to export to. Options: torchscript, onnx, etc.

And now, run the inference script again, this time using the deepsparse engine and with only 4 CPU cores in the --num-cores argument.

Just like that, we improved the average FPS from 21+ (PyTorch engine on CPU using 8 cores) to 29+ FPS. All we did was use the ONNX model with the DeepSparse engine.

P/S: We are done with just the baselines here! The real action only happens next - when we run sparsification with 👇

Sparsification is the process of removing redundant information from a model. The result is a smaller and faster model.

This is how we speed up our YOLOv5 model, by a lot!

In general, there are 2 methods to sparsify a model - Pruning and Quantization.

⚡ P/S: Used together or separately both pruning and quantization result in a smaller and faster model!

How do we sparsify models?

Using SparseML - an open-source library by Neural Magic. With SparseML you can sparsify neural networks by applying pre-made recipes to the model. You can also modify the recipes to suit your needs.

You may wonder, this sounds too good to be true!

With sparsification, you can expect a slight loss in accuracy depending on the degree of sparsification. Highly sparse models are usually less accurate than the original model but gains significant boost in speed and latency.

With the recipes from SparseML, the loss of accuracy ranges from 2% to 6%. In other words the recovery is 94% to 98% compared to the performance of the original model. In exchange, we gain phenomenal speedups, ranging from 2x to 10x faster!

In most situations, this is not a big deal. If the accuracy loss is something you can tolerate, then let’s sparsify some models already! 🤏.

The one-shot method is the easiest way to sparsify an existing model as it doesn’t require re-training.

But this only works well for dynamic quantization, for now. There are ongoing works in making one-shot work well for pruning.

Let’s run the one-shot method on the baseline model we trained earlier. All you need to do is add a --one-shot argument to the training script, and specify a pruning --recipe. Remember to specify --weights to the location of the best checkpoint from the training.

It should generate another .pt in the directory specified in --name. This .pt file stores the quantized weights in int8 format instead of fp32 resulting in a reduction in model size and inference speedups.

Next, let’s export the quantized .pt file into ONNX format.

And run an inference

At no re-training cost, we are performing 10 FPS better than the original model. We maxed out at about 40 FPS!

The one-shot method only took seconds to complete. If you’re looking for the easiest method for performance gain, one-shot is the way to go.

But, if you’re willing to re-train the model to double its performance and speed, read on 👇

With SparseML you can take an already sparsified model (pruned and quantized) and fine-tune it on your own dataset. This is known as Sparse Transfer Learning.

This can be done by running

The above command loads a sparse YOLOv5-S from Neural Magic’s SparseZoo and runs the training on your dataset.

The --weights argument points to a model from the SparseZoo. There are more sparsified models available in SparseZoo. I will leave it to you to explore which model works best.

Running inference with annotate.py results in

We almost 2x the FPS from the previous one-shot method! Judging from the FPS value and mAP scores, Sparse Transfer Learning makes a lot of sense for most applications.

But, if you scrutinize further into the mAP metric on the Wandb dashboard, you’ll notice it’s slightly lower than the next method 💪.

Here, instead of taking an already sparsified model, we are going to sparsify our model by pruning it ourselves.

To do that we will use a pre-made recipe on the SparseML repo. This recipe tells the training script how to prune the model during training.

For that, we slightly modify the arguments of train.py

The only change here is the --recipe and the --name argument. Also, there is no need to specify the --epoch argument because the number of training epochs is specified in the recipe.

IMPORTANT: The sparsification recipes are model dependent. Eg. YOLOv5-S recipes will not work with YOLOv5-L.

So make sure you get the right recipe for the right model. Check out other YOLOv5 pre-made recipes here.

The drop in FPS is expected compared to the Sparse Transfer Learning method because this model is only pruned and not quantized. But we gain higher mAP values.

We’ve seen the effects of pruning, what about quantization? Let’s run quantization for the YOLOv5-S model and see how it behaves.

We could run the quantization without training (one-shot). But for better effects let’s train the model for 2 epochs. Re-training for 2 epochs allow the weights to re-adjust to the quantized values and hence produce better results.

The number of training epochs is specified in the yolov5s.quantized.md file.

We have a bump in the FPS compared to the pruned model. With careful observation you’d notice a misdetection at the 0:03 second.

Here, we see that the quantized model is faster than the pruned model at the cost of detection accuracy. But note, in this model we’ve only trained for 2 epochs compared to 240 epochs with the pruned model. Re-training for longer may solve the misdetection issue.

But, can we run both pruning and quantization?

Now, let’s take it to the next level by running both pruning and quantization. Note the difference --recipe I’m using.

Export with export.py and run inference with annotate.py. We get

On our Wandb dashboard this model scores the highest mAP and is also the fastest.

It’s getting the best of both! 🎯

I wanted to end the post here. But there is still this nagging thought that I can’t ignore. It’s keeping me awake at night. So I had to do this 🤷‍♂️.

Every night I wonder how fast can we run YOLOv5 on CPUs? I mean the maximum possible FPS with SparseML + DeepSparse.

In the YOLOv5 series, the YOLOv5-Nano is the smallest model of all. In theory, this should be the fastest.

So I’m putting my bets on this model. Let’s apply the same steps again with the YOLOv5-Nano model.

🤯 This is mindblowing! The max FPS hit the 180+ range. I never imagine these numbers are possible, especially using only 4 CPU cores.

Seeing this, I can now sleep peacefully at night 😴

What a journey this has been.

Gone are the days when we need GPUs to run models in real-time. With DeepSparse and SparseML, you can get GPU-class performance on commodity CPUs.

P/S: Check out codes on my GitHub repo.

If you ever get lost in the commands that I used for this post, fear not. I listed all commands I used to train all models on the README of the repo.

Also, feel to use the repo with your own dataset and give it a ⭐ if it helps your work.

I hope you’ve learned a thing or two from this blog post. If you have any questions, comments, or feedback, please leave them on the following Twitter/LinkedIn post or drop me a message.

Anyone can train a YOLOv5 (@ultralytics) nowadays. But deploying it on a CPU is such a PAIN.

I need your help 🙏

⚠️ I'm seeking remote employment opportunities as a Data Scientist or Machine Learning Engineer. If you know of any openings, I'd be forever grateful if you can connect me.

Or, if you wish to support me in creating more contents on machine learning deployment tips and tricks, consider buying me a coffee. Your support means a lot to me 🤗